Around 2:00 last Thursday I felt like an enormous fool. I had been looking forward to attending that evening a meeting of the minds between two fine writers: Pico Iyer and Murakami, at the Orpheum Theater in downtown LA. As I printed out my online admission ticket on real paper—like an unfashionably old school printer—I realized with a sinking feeling that the lively literary exchange between “cultural philosopher” Pico Iyer and Haruki Murakami, author of The Wind Up Bird Chronicle, Norwegian Wood, IQ84 (which I had so admired) was not going to happen. The Murakami appearing that night was Takashi Murakami, founder of the anime-inspired Superflat Art movement full of big eyed anime-style figures and cute icons; what Flash Magazine called “lite happiness.” I, who had been congratulating myself on becoming more aware of details, then noted the obvious: that head shot of Murakami on the flyer I had posted on the refrigerator for a week had a painting in the background (not to mention the truly crushingly obvious: that his given name appeared on the brochure).

Regardless of the mixup, when I reached the Orpheum I felt like I had the hottest ticket in town. There was a line a half block long of people waiting for available seats. Clutching my printed ticket I bypassed them all and, in the lobby, passed several others who struggled to bring up e-tickets on their phones in front of non-nonplussed ushers.*

Takashi Murakami came on to the stage wearing a large pink hat with a face on it, suspenders, and baggy pants. By contrast, Pico Iyer was long-boned and elegant. In one of his books, The Lady and The Monk, Iyer described the process of falling in love with a Japanese woman in Kyoto. He now lives in Japan and is married to the “heroine” of that book. The third chair was for a translator, but the talk was principally conducted in English. Murakami’s range of English was limited but within that he was fully articulate. Quite funny, too, in the way that Japanese men with an imperfect command of English can be, with a disarming humility. Iyer framed the talk by noting Murakami’s images of seemingly supercute beauty often seem to be surrounded by something apocalyptic or frightening—an active spirit world, perhaps, beyond what is normally seen. That thread ran through the entire talk.

Some gleanings from the talk:

1) From an early age, Murakami was surrounded by reminders of war, including, of course, the dropping of the atomic bomb. His mother hailed from the city of Kokura, which was spared the first atomic bomb because it was socked in that fateful day. She used to tell him “if Kokura had not cloud then maybe you wouldn’t be here.” War and doomsday fear were everywhere; on the TV with the images of the Vietnam War, in the remembrances of the atomic bombs, even in nature. He and his contemporaries were taught to fear the rain which, it was thought, carried radiation from the nuclear testing that was carried out in the Pacific.

2) A great admirer of the work of Miyazaki, Murakami went to school because he wanted to be an animator. Because he felt he was no good at art, he opted for the specialization of traditional painting.

3) Impressions of his first trip to see the New York art world: Anselm Kiefer at the Museum of Modern Art moved him to tears. He was less complimentary about a number of other contemporary artists. He found Jeff Koons “superconfusing.”

4) Murakami believes that Japan is having a “very strange wave now.”

5) The most apocalyptic event of our recent times, Fukushima has had a considerable impact on Murakami. On the philanthropic level, he has organized a charity auction that netted several million for relief efforts. On the community level, he has an office near Fukushima and said that the fact that he has located there helps legitimize those communities. However, he wondered about the safety of the air he was breathing. Three years hence, the issue of Fukushima seems more fraught than ever. He pricked up his ears when Iyer asked if he knew about ghosts appearing around Fukushima. Apparently a significant number of people now walk around thinking they are surrounded by their ancestors, or experience a strange kind of possession – I think he must have been referring to this fascinating story.

6) Iyer pushed Murakami to admit whether, in his art, he is trying to send a message to the Japanese people. Murakami neatly sidestepped that one.

7) He was in Los Angeles to promote his first movie, Jellyfish Eyes. The pink creature he was wearing on top of his head was featured in the movie. One of the tweeted questions (a disappointing lot, by the way) at the end of the discussion was an inquiry about where one could buy the hat. He demurred, saying it had cost a thousand dollars and taken a seventy year-old man three days to make.

At the end of the Q & A period Murakami hawked premium tickets to the movie premiere the next night. This made some ladies behind me get huffy and they flounced out, muttering. In my opinion, however, the man has spent his career thumbing his nose at convention (in a country where convention is far more binding than it is here) and commercialism. To coyly wave the little limited edition statuette you could receive if you bought a premium ticket—as Murakami did—struck me almost as performance art and was a perfect, in all its crassness, way to end the evening.

Murakami is not a simple individual and, by his own account, difficult to work with. Those who humorously admit to being demanding usually are. He certainly possesses a unique artistic perception and seems a good litmus for his times and his people. As I was carried by the tide of the crowd out of the theater, I was still disappointed that I had not gotten to see the other Murakami. However, I did feel that my twelve dollar admission ticket had been worth it. For an hour and a half I had been in the presence of a cultural figure, one with all the ambiguity and elusiveness that distinguishes the best of them. In the fullness of time will he be considered a superimportant one? That remains to be seen. 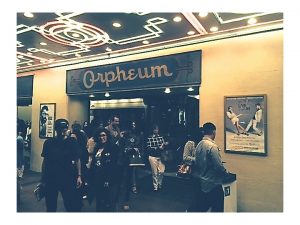 1 (of a person) surprised and confused so much that they are unsure how to react : he would be completely nonplussed and embarrassed at the idea.

2 informal (of a person) not disconcerted; unperturbed.

USAGE In standard use, nonplussed means ‘surprised and confused’: : the hostility of the new neighbor’s refusal left Mrs. Walker nonplussed. In North American English, a new use has developed in recent years, meaning ‘unperturbed’—more or less the opposite of its traditional meaning: : hoping to disguise his confusion, he tried to appear nonplussed . This new use probably arose on the assumption that non- was the normal negative prefix and must therefore have a negative meaning. Although the use is common, it is not yet considered standard. The preferred spelling is nonplussed. Source: Apple Dictionary