At the beginning of May, I attended the Buenos Aires Book Fair for the second year in a row. The book fair, which touts itself as the most important annual literary event in the Spanish speaking world, lasts for nearly three weeks and receives well upwards of one million visitors every year. The fair buildings are massive, vaulted marble structures with an arena outside that looks as though it were made for bullfighting, a belief lent credence by the massive statue of a bull outside its dirt ring.

The Fair’s guest of honor this year was the city of Los Angeles. At the time I was there, in the “professional days” before the throngs of the book buying public descend upon the fair, the pavilion was nearly deserted. I put on my sunglasses and struck a pose for awhile but perhaps I was judged to be an inorganic figure from the exhibit. No one came up to me to ask for autographs or pepper me with questions about the City of Angels.

It was raining on the day I arrived but in the following days the weather turned brisk but sunny (in May it is Autumn there). It was just cold enough to keep you moving and the clarity of the sunlight and the clear air set off the city to perfection. Buenos Aires is one of my favorite cities in the world. It is majestic, many statued, bumpy-sidewalked, chockablock with bars and cafes and restaurants that have, in the United States, been replaced by Paneras, Starbucks, Subways, El Pollo Locos and their ilk.

Like the United States, Buenos Aires was populated by immigrants. In 1906 it was the only city in the southern hemisphere that had a population of over 1 million. It possesses that elegance that can only come from having once enjoyed a golden age. The city is an ideal place for people watching. The faces on the streets, in the subways, in the plate glass windows of the dining establishments are full of character. Faces in the United States used to possess that aspect too. (If you want to know what I mean, take a look at Robert Frank’s The Americans, published in 1959.)

I was fortunate, this time, to have a chance visit the Falls of Iguazu, on the border of Brazil. The falls are too vast to take in all at once. I felt similarly when I stood at the rim of the Grand Canyon for the first time. On the Argentina side they say you can feel the falls, whereas on the Brazil side you can see them even more broadly. I was only able to take them in from the Argentina side, and for less than 24 hours. As soon as the park opened on the day I left, I jogged along the tracks of the narrow gauge railway that takes tourists to the Garganta del Diablo (The Devil’s Throat) and was therefore the first one of the day to experience that massive deluge. Rainbows were everywhere, but right on the brink of the precipice, where birds wheeled above the maelstrom, it was like being in a cloud. I was soon soaked to the skin. 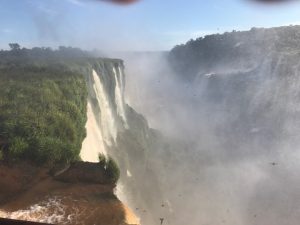 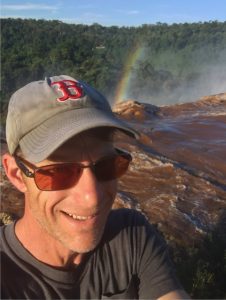 Posted in The Crash Papers, Uncategorized
Scroll To Top