I attended Printed Matter’s LA Art Book Fair on Friday. Getting there through the Friday traffic was an unbelievable ordeal (praise be to WAZE, however, for navigating the congested streets). Held at the Geffen Contemporary at MOCA, the fair was as crowded as the highways outside.

I remember my surprise when I attended the fair two years ago, expecting to find numerous photo book publishers and seeing instead a bazaar of booths selling Zines and saddle-stitched books as well as t-shirts and prints mixed in with art book publishers. What I defined as “art book” was quite limited.

Clearly the show has been successful as a way to reach out to the broader book audience. For the gallery with the Zine booths and very small publishers was packed with fairgoers. My favorite book from that area was an “unauthorized” catalog of a show that had taken place at the Guggenheim. Basically, the publisher had gone through the exhibition and taken snapshots of each artwork and, there it was, comb bound with a clear plastic cover.

Book publishers from around the world were in attendance at the show, with a strong showing from Japan and Europe. One of the most interesting displays was an exhibit called “Present Perfect” by Werkplaats Typographie, featuring a book in progress. Each section had been designed by different typography student and the book was being printed at the fair, as we spoke.

Book titles seen: THESE ARE THINGS I STOLE (featuring things that the artist had stolen) and SOMETIMES A CIGAR IS JUST A CIGAR (bright pink casebound book).

Overheard (often): “This just makes me want to buy more books.” and “I wish I had waited (to buy books) until I saw this.” 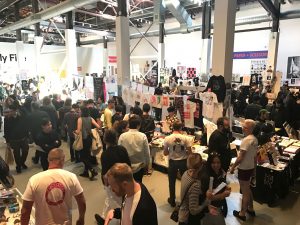