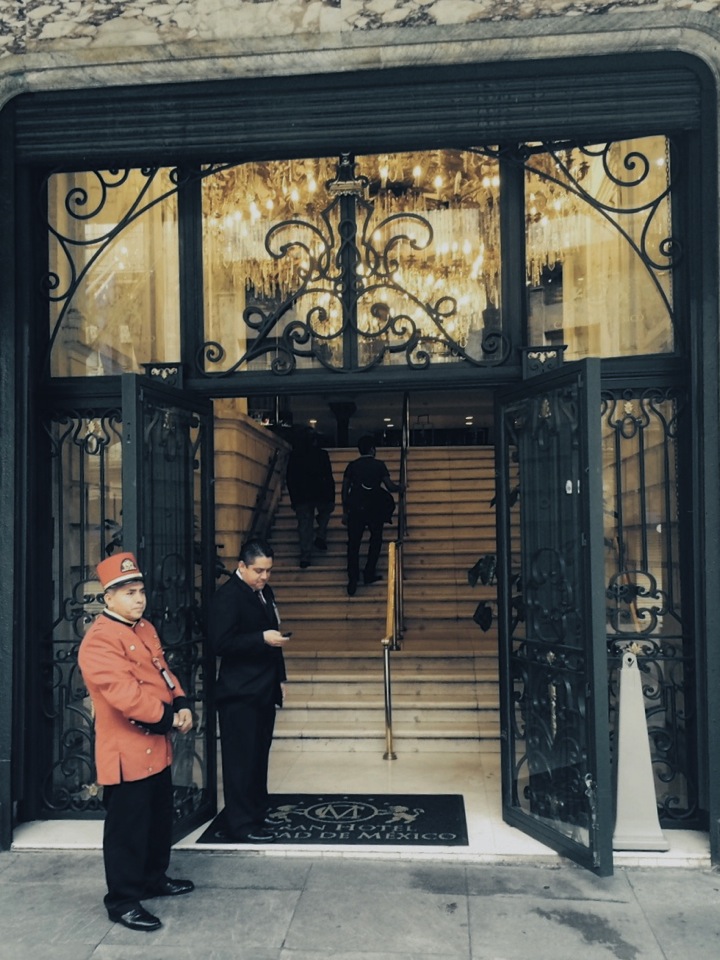 E-5. That was the sign on the lightpole under which I parked the Saab. It is significant, why? Because I remembered it easily, whereas in the past year and a half since Crash Paper was founded and our daughter was born, my bandwidth was stretched to its maximum extent. I would have to resort to a lame mnemonic device I might have forgotten as easily as E-5. Or write it down.

For the first time since my initial trip to México City a decade and a half ago, the sour smell of pollution did not assail my nostrils as soon as I stepped off the plane. I didn’t know what to make of that. For the first time, too, on the approach, the city itself did not strike me as being so different from the place I had left (Los Angeles). In fact, the streets the taxi rattled down bore a resemblance to similar corridors I have passed through in Shenzhen and Dongguan—half a world away. They were poorer streets with shops that were little more than apertures at street level with wares piled on plastic crates; the mercantile equivalent of subsistence farming.

Soon enough, the surroundings began to look familiar and then we swung around a turn to behold the Zocalo—the square at the governmental heart of México City that is bounded by an enormous church, official buildings and shops as well as the former center of the universe (if you happened to be Aztec). All buildings except the church are squared off, with crenellated roof lines, heavy and solid and ancient. This is another tableau where oppressed people have sometimes gathered to voice their complaints, with mixed results.

My destination, the Hotel Gran Ciudad de México, occupies one corner of the square. These days most culture swirls around other districts of the city (I spent most of my travel budget on taxis.) But I have a fondness for the hotel which was only intensified when I watched the Grand Budapest Hotel  this spring.

When I arrived, the bellboy greeted me with, “Welcome to the second most beautiful building in México City.” Indeed. After climbing a short flight of stairs to the lobby under an enormous crystal chandelier that once belonged to the people until Porfirio Diaz gave it away in a fit of presidential (and completely illegal) generosity you find yourself in a great vault of space. Above you floats a magnificent Tiffany ceiling of twenty thousand pieces of glass. Wrought iron catwalks run around the periphery of the lobby on the upper floors, accessed by two of the oldest elevators in the country, wrought iron as as well. Across from you, an ornate staircase curves to the left and the right under a half shell, each step of it a different shape and depth than the previous, in complete aesthetic disregard for muscle memory. If you arrive with daylight the lobby is graced with the sound of singing canaries. At night, their two oval cages are covered in purple drapes.

From the window of the hotel restaurant at breakfast, I could overlook the Zocalo. Promptly at eight o’clock a door opened in the federal building across the square and the sound of trumpets, drums, and martial feet bled through the plate glass. Soon a line of soldiers appeared, the color guard carrying on their shoulders what looked like an enormously long red, white and green snake. They marched it to the giant flagpole at the center of the square and raised the Mexican flag  – all 14.3 x 25 meters of it –bigger, that is, than any American flag I have ever seen flying over any truck or car dealership in all my travels.

Below me on the street, a man pedaled a bike welded to a cart full of breakfast pastries, an organ grinder took up a position in the shade of a building, and all manner of vehicles started rolling by. In a recent article on the architect Luis Barragán, Guy Trebay wrote:

“for almost as long back as I can recall, I have been drawn to the accreted material density of this chaotic capital of 21 million, a place whose successive warring cultures piled their monuments atop those of the vanquished; whose anthill tumult, against sense and logic, remains in some mysterious fashion orderly; whose public spaces often impart to pedestrians a distinct sense of processing across a vast stage set dressed with the architectural furniture of many ages.”

It is this sense of ordered tumult that I love about México City, which I traversed for the next three days by taxi (note: for the first time, every cab driver I encountered had a phone with a gps mapping system, and they drove with their usual hairbreadth skill combined with a confidence in finding their destinations that they never seemed to possess before). Everywhere, even on those grand stages, things seemed to get done on a human scale, whereas in Los Angeles so many things are done, products produced, services rendered behind closed doors. They emerge from cavernous assembly warehouses to be delivered by squadrons of large, uniformly painted delivery trucks, to join the merchandise on shelves and racks and end caps or to be purveyed from behind bland counters with chilled display windows. Where would you go in LA if you needed a bike to be welded to a cart? Or a single dummy book to be made? Here in the city of angels a blank dummy book would cost a small fortune. But I have seen, in many client offices in México City, dummy books that must have been made in a small shop somewhere by a craftsman of some sort. On every other street in the historic center, one finds papelerias that sell colored paper by the sheet, have comb-binding machines in their front windows, and (probably barely) get by on convenience, established clientele, tradition. These common touches, and jerry-rigged conveyances, even the fondness for uniforms, tie México City and those giant industrial cities in Southern China together—and somehow seem to exclude us.

This is not to say that shoppers clubs like Wal Mart are not doing very well in México, nor that the city is somehow primitive; in other parts of the Distrito Federal one sees architecture, graphic design—and books—that are as modern and sophisticated as anything you can find anywhere. What is the most beautiful building in México City that the bellboy at the hotel alluded to? A monument to the place of arts and letters in México: the Palacio de Bellas Artes  commissioned with passion by the magnanimous Presidenté Diaz.

It is a Mexican appreciation for the craft, I think, that led an intrepid Mexican designer to find Toppan Printing Company in Los Angeles and its fine printing plant in Tokyo more than two decades ago. As a Japanese printing company with a heritage of art book printing, Toppan did not disappoint. Relationships of mutual, and deep, respect have flourished. Since then Toppan printing companies in Japan, China and Hong Kong have produced many notable photographic and artbooks for the Mexican market, almost all of them impeccably designed and as unstinting in their use of materials as the budget allows. I am filled with pride when I visit a Sanborns or Libreria Gandhi—or even the gift shop of hotels I stay at—and see so many books I worked on among the multitude. Perhaps that is part of the reason why, every time I visit the city, I come back with more vigor than when I arrived, no matter how taxing the schedule might be. The energy there is infectious.

I drank up as much as I could of it while I was there. But Mar Vista, and my wife and three children beckoned. I arrived at LAX around midnight three days later and collected my bags after another forty-five minutes in the nearly empty arrival hall. Strode briskly through the cool, clear air to E-5 in the Park ‘N Fly lot. My car’s engine fired immediately and the CD started up in the same spot where it had left off. The México City trip folded in on itself and filed into my portfolio of experience. Soon I was back on Los Angeles’s broad streets in the soft lit violet gloom—more a dream landscape than a vast stage—and gunning for home. 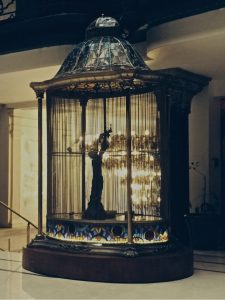 I know why the caged bird sings 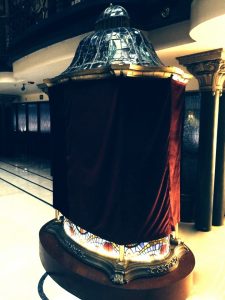 At night the cages are covered in velvet drapes 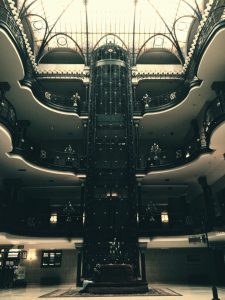 These were the second elevators to have been installed in México 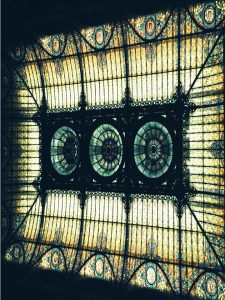 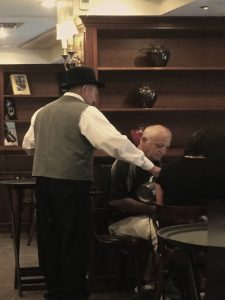 Bowlers in the restaurant